I used to be an avid World of Warcraft player, raiding bosses many times a week with my guild. In order to get the most out of my own performance I forked an advanced UI replacement addon named Tukui into my own project, I named Epic UI (after my gamertag, Epicgrim).

Before my days with Tukui and EpicUI I did what many WoW players did, and customized my UI with addons that let me drag around boxes, and put things inside them. All from within the game, and without a single line of code. At this point in my life I had never written any code. 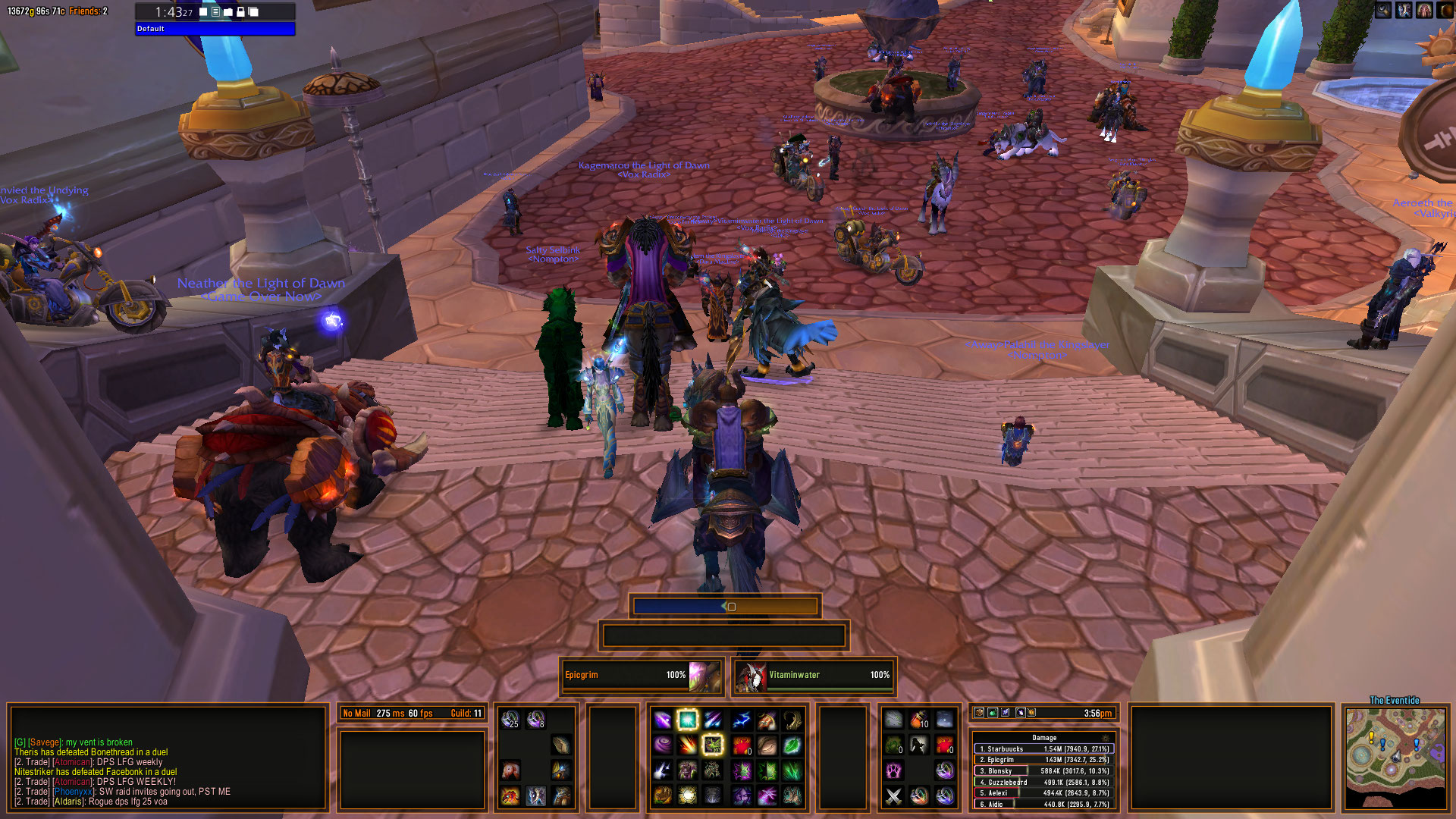 As you can see the result was a very “boxy” UI, and not one that I was very happy with. I was developing an opinion that the raider (PvE WoW player) is only as good as his UI lets him be. It was crucial that I find a way to show the needed information, without so much clutter.

Let There be Code!

After I discovered Tukui, it only took me a little while before I downloaded Notepad++ (the OG editor) and started making my own modifications. I didn’t know LUA, but for the basic things like moving a UI element somewhere else the code was simple.

Since so much of UI programming is just a matter of getting things into the correct place, this got me off the ground running. As I needed to make more and more changes I learned more and more about LUA, and the WoW APIs (some of the best APIs I’ve worked with to date).

An early version of Epic UI can be seen below. The unitframes (boxes with a claw next to them in the screenshot) have player info in the middle, a design I’m glad to have dropped. 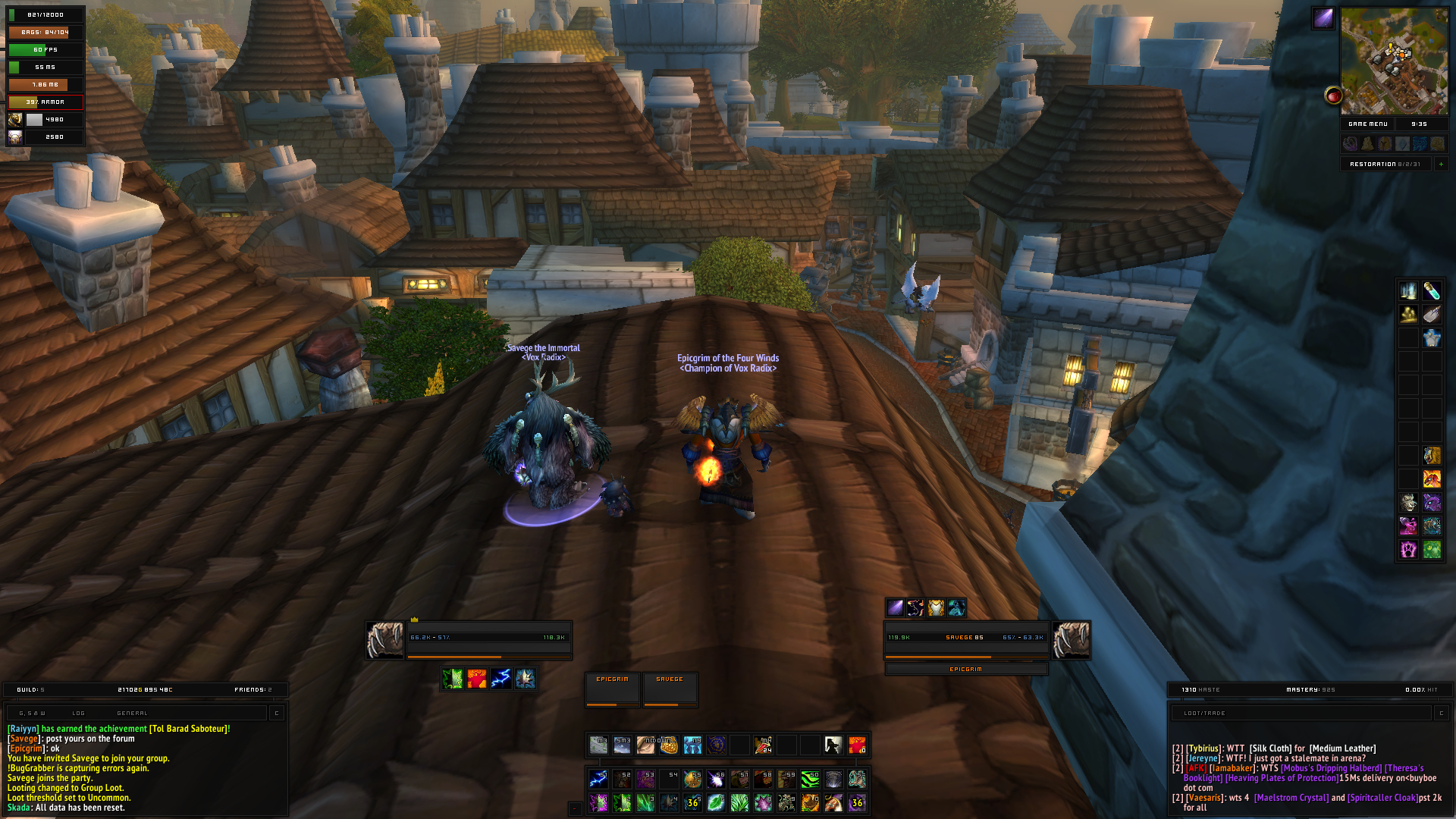 Many other features were added, most notably a “buff” tracker (under the minimap), to ensure I had every advantage possible before each boss fight. Many of these features were collaborations with people on the Tukui forums, which I had become a regular member of.

I ditched the middle info panel, and started to develop a real style. Some friends of mine started to use my UI, and I created a bit of a brand for the whole thing.

As the style grew, I updated the banner logo, and even started to version things (sadly 2.1.1 was the last version).

In EpicUI 2.0 I decided to move the power bar (mana/etc) to the border of the unitframes. This was in many ways what distinguished my UI from the rest. Even though much work had been done under the hood as well. The visual changes are the most obvious to people. World of Warcraft has so many mechanics, that building a UI that handles them all consistently is no small task.

I would occasionally play a healer (resto shaman). I quickly discovered that my UI wasn’t optimal for this role, so I started further customizing it for each class/spec.

I only ever made the base (caster DPS), and shaman healer layouts however.

Of course, programming is not without bugs, and when you are modifying your UI in the same time-frame as you are raiding at a relatively high level the bugs can have very dramatic effect. Below I managed to capture a bug that blocked a good part of my screen while fighting a new progression boss in Firelands, Majordomo Staghelm. 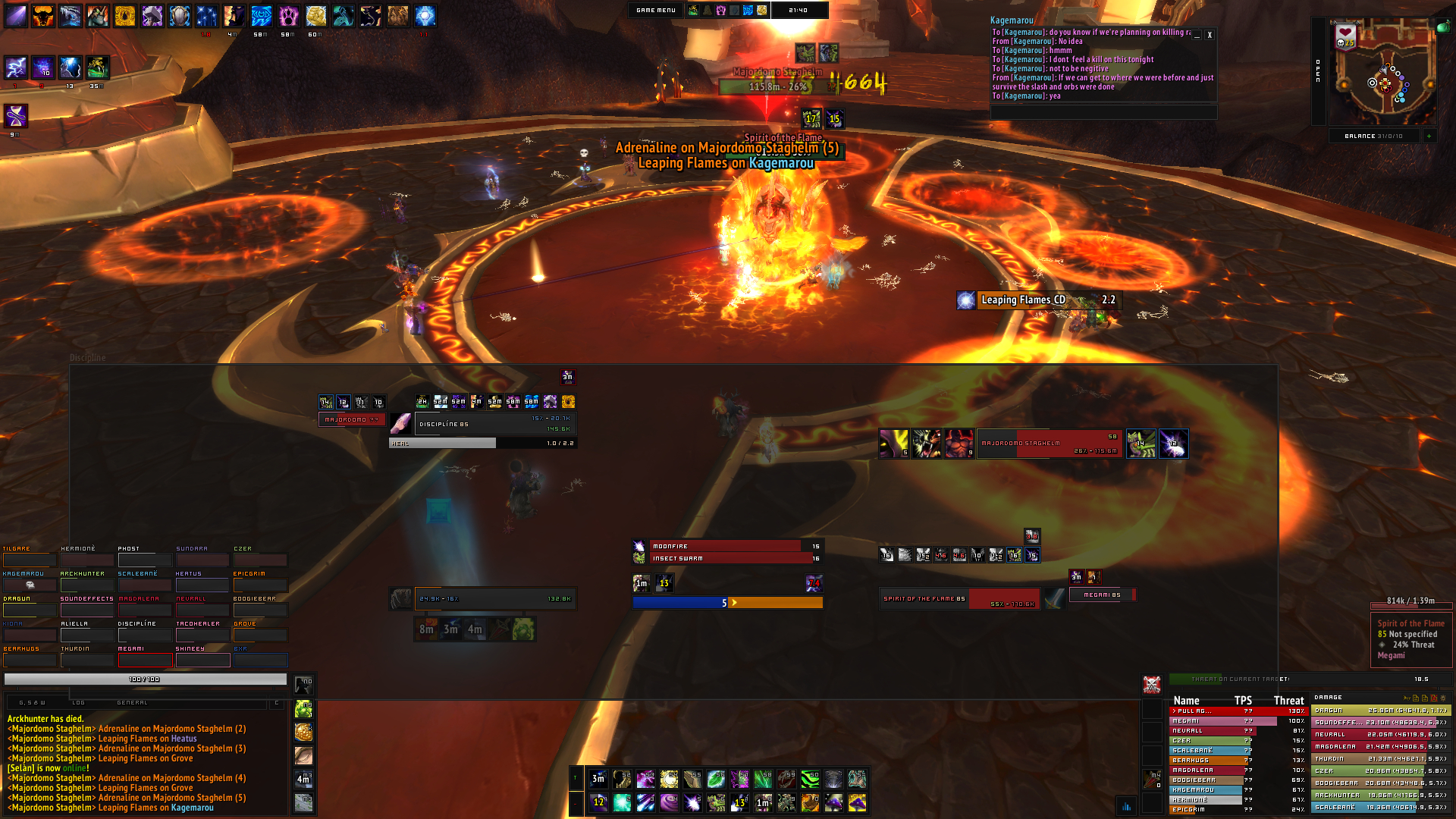 Other bugs have caused me to be unable to perform actions, or see needed boss abilities. It was a delicate act balancing developing my UI, and maintaining a reputation of a reliable DPS player.

An interesting story from my days in Firelands is the tale of Dragonwrath, Tarecgosa’s Rest, a legendary weapon that required a full raiding guild (25+ members) to create over many weeks for a single player to obtain. I was lucky enough to be the second member of my guild to receive it. Once I did however it became clear to me that the inner workings of this item were not yet known to the public.

Without going into too much detail, the staff had a chance to do a lot of damage, but it wasn’t exactly clear what caused it, and what the probabilities actually were. I know how to write code now I thought, this should be easy to figure out. Sure enough after only a few hours of programming I had a simple addon that would calculate the “proc-rate”, even if the addon looked like garbage. 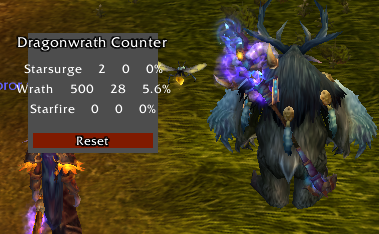 A Hack to Progress

This story almost definitely falls under a category of things Blizzard loves to ban people for, however it’s been so long, and the gained achievement all but forgotten. Let me tell you the story of Heroic Maloriak 25 man, I raided with Vox Radix.

We were Darkspear’s (Swifty’s server) number 1 raiding guild. I don’t just tell you this to pad my ego, but as an indication that we were good at the game. But for whatever reason, this one boss fight mechanic was proving insurmountable for us. In short there was a boss ability that has a very short cast time (< 1s) which if left un-interrupted would wipe the raid. So we wiped, and we wiped, and we wiped. Countless hours wasted to a single issue.

One night me and a friend stayed up late talking (as we normally do). I was expressing my frustration with the interrupts, and my powerlessness since I played a class without an interrupt. I remember thinking, “I’m learning to make WoW addons I should just hack the fight!”. This sent me down a research path where I learned about hooksecurefunc and the world of Taints! Without boring you too much with the details of all that, WoW has various mechanisms for preventing you from say, creating an addon that casts an interrupt as a reaction to a boss ability automatically. Well shit.

“It’s impossible”, I first thought. Then it dawned on me… There is nothing stopping me from showing and hiding frames as a reaction to a combat event. Toggling frames is a pretty fundamental thing, and it’s nice that you can do that in combat. So all I needed to do is write an addon that has a frame sit directly over the user’s interrupt spell, and disappear hen the boss casts. The addon took about an hour to write, and maybe 3 hours to debug with my friend.

The next raid night my friend (enhancement shaman) was equipped with the addon and would spend the whole fight clicking (with the mouse) on the area of his actionbars where the interrupt was. As soon as the boss started casting, the addon would disappear, and the interrupt would go off. Sure enough, not a single wipe to a missed cast.

We didn’t kill it that night, because there was a new phase to learn at the end. But we got to that phase for the first time, and I felt like a hero.

What a Long, Strange Trip It’s Been

I still have my account, and log on from time to time, but the long nights and endless thought has mostly died down. I’m a casual player, and I don’t run my own UI anymore. ElvUI, another project from the same community is my go to, and I’m pretty happy with it overall.

WoW to me will always hold a special place in my heart. Not only for the people I met playing the game, but also as the gateway drug to harder programming. I owe it all to a little LUA and a lot of help from the members of Tukui. 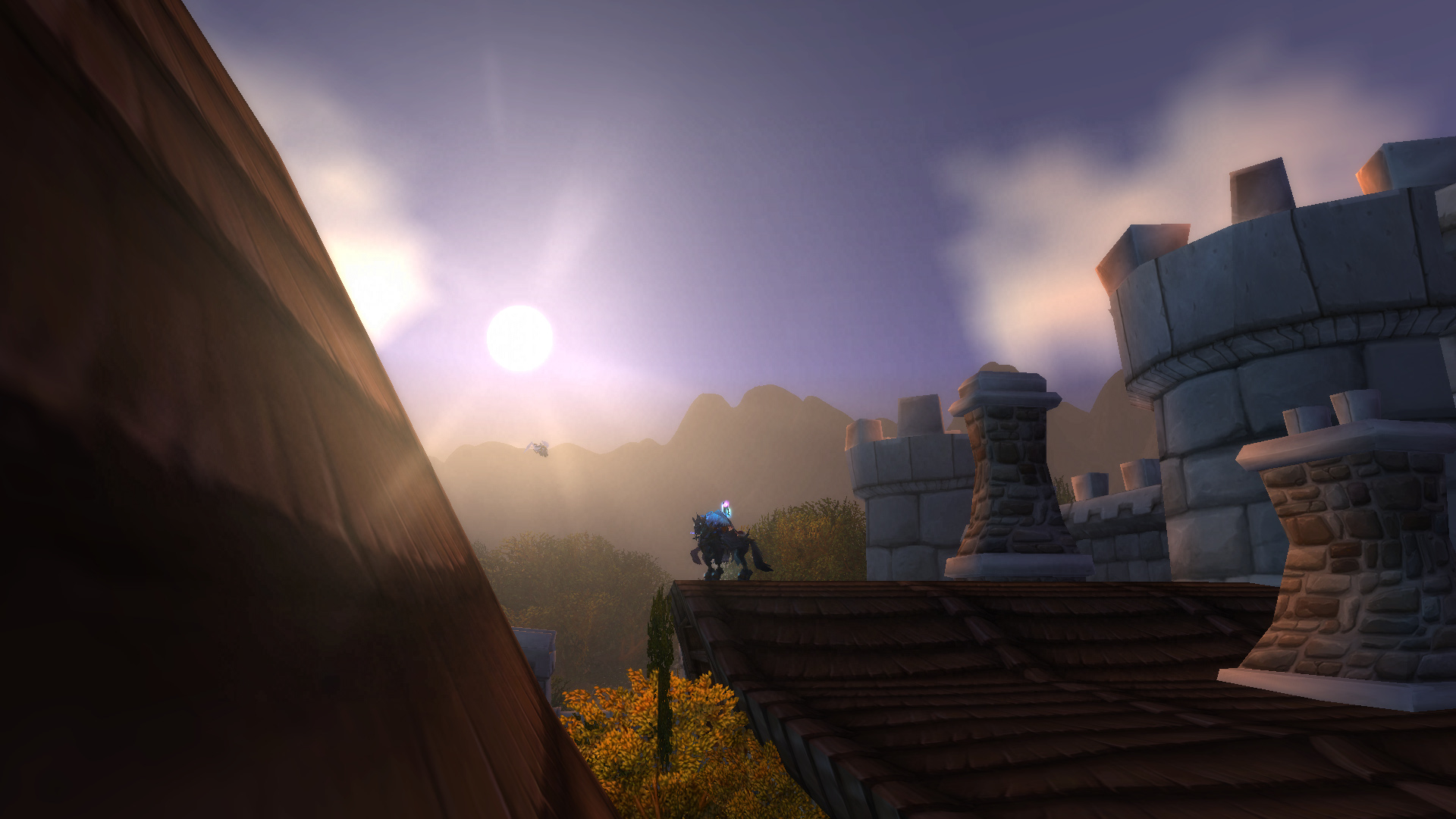