As I’ve been a contributor to Alacritty, I’ve had to read and respond to a number of complaints about our stance on releases and packaging our application for macOS and Windows. There have been a lot of different complaints recently about code signing and notarization.

Users are understandably hoping to have a seamless experience running the software they download from our releases page. However, the seamless experiences of yesteryear are changing and both Apple and Microsoft have left open source developers in the dust when architecting their new platform requirements.

In this rant, I hope to explain what 1. code signing and 2. notarization are, and what they offer in terms of security. I offer some 3. suggestions for users on how to think about who they are trusting in the software distribution. Next, I hope to show the difference between between 4. developing and distributing software. Since Linux, macOS, and Windows all allow applications built locally to be run freely, I argue that code signing and notarization are purely issues of distribution.

A digital signature in cryptography is a “public-key” algorithm (e.g. DSA) which allows a third party to verify a message, \(x\), was signed with a secret key corresponding to a known public key. If the message or key do not match that of the signer, then the verification will fail. Mathematically we can view this as a two part algorithm:

When the message, \(x\), is the entire contents of a software package itself, this process implements code signing. This works because users only need to know the public key to verify, but cannot falsify a signature without knowing the private key.

In practice, the integrity of a signature is only as strong as the integrity of the public key it’s paired with. If you find yourself downloading a package and public key for verification from the same place, it’s really no stronger than a checksum of the contents of the package.

Some distributions require special (generally paid for) certificates to be used to validate the ownership of a secret key. Other distributions have a blessed list of keys, held by the trusted members of the team or community. 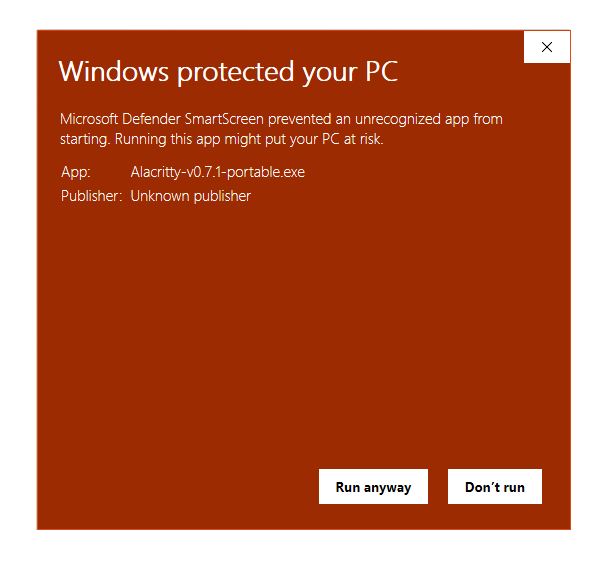 The dialog above is what Windows users will see when launching Alacritty for the first time when downloaded directly. This is because we do not pay for and manage a certificate for Microsoft’s code signing process. More on this below in section 4.

Notarization takes code signing a step or two further, with a complex series of steps for developers to follow.

In addition to checking the software was in fact created by who it said it was created by, notarization offers the distribution platform a way to invalidate releases of the software as they become flagged as malware. Apple is the primary platform pushing this distribution requirement. 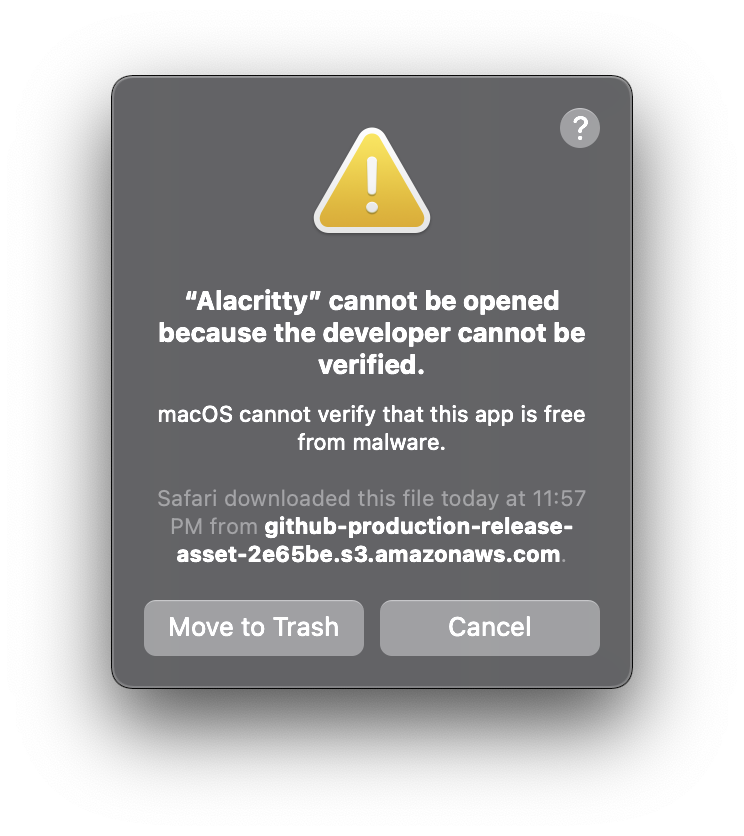 This works by flagging software as quarantined until, upon the first launch, the software notarization is checked. On macOS this flag can be removed either in the system’s preferences, or by running the following command:

To my knowledge, applications aren’t flagged as malware for legal reasons such as breaking intellectual property law or other harboring of illegal activity. However, it’s not hard to imagine this happening as well. We’re edging closer and closer to a world where simply running software requires legal sign off.

If it weren’t for the fact that applications can bypass the notarization requirement at the request of the user, we would already be living in this dystopia. Luckily, it’s still an approved and relatively easy process to grant these bypasses to individual applications.

The crux of the argument on the Alacritty issues listed at the start of this post can be understood as a conflation of development and distribution.

Distribution support is not the same as the software support itself.

Just as some software may not be included in a package manager of specific flavors of Linux, some software may or may not be packaged with signatures and/or notarizations. In both cases, the underlying software can still be fully compatible with the platform, even being tested effectively (developers generally compile from source themselves). Both package manager submission and package security features are separate from the development of the application itself. In many cases, the packager is even a separate person from the development team.

It may be fair to say that both software support and distribution support fall into the category of “fitting in with the ecosystem”. For some software, this fitting in is crucial, while for others it may matter less. A lot of great software aims to be platform agnostic, which can already be a challenge to achieve at the running software level.

For Alacritty, perhaps the most widely used cross platform terminal emulator, being platform agnostic is very important to us. With that in mind, it should be understandable why we are resistant to adding too many features to our codebase which only work for specific platforms, and why we generally avoid dealing with distribution issues at all.

At the very least, distribution support implies software support. Which means, if you’re going to start somewhere, you had better get the software itself working. Distributing broken software would be useless. It also should help you understand that some software may still work, even if installing it may be a bit different than you expect.

Of course in the case of Alacritty, it is open source, so there’s never anything stopping you from pulling down a version and building it yourself. This is how I install it, and is probably the best way to do things in general. If build times are a concern of yours, then there may be hoops to jump through (like passing homebrew’s --no-quarantine flag), but that’s not stopping you from using the software either.