To run an MPC we must be able to label each party (and virtual party) which constitutes the protocol. Based on the architectures given as challenge problems in the HECTOR GFI, we attempt to create a notation for easily describing these topologies.

Sets of fully connected parties are denoted with {}, for example the following shows a simple network of four parties: 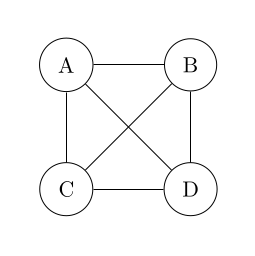 We can nest sets within each other:

The two examples above are equivalent, however it may be useful to label specific groups of nodes anyway.

We can also define fully disconnected graphs with [].

While a disconnected graph may seem useless by itself, when nested within a larger connected graph they allow us to represent arbitrarily complex topologies of graphs (TODO: is this actually true?).

For example a “star” network with four edge nodes and a single center node can be represented like this: 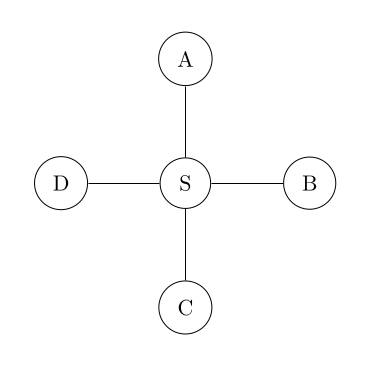 Or a more complex example of a “server star” graph, linked into an MPC protocol.

With the ability to express arbitrary graphs, we can construct MPC protocol architectures for the constituent parties. A single pair of nodes \(A\) and \(B\) can be connected together with virtual party \(P\) as shown below. 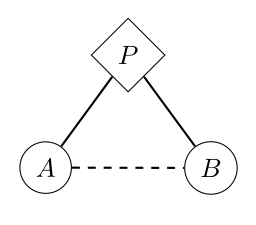 This gives conceal and reveal operations (solid edges) going up and down the graph with respect to the virtual party \(P\), as well as send and recv operations (dashed edges) between the parties. It’s worth noting here that \(A\) and \(B\) must be allowed to communicate, meaning that the notion of “connectedness” is talking about the ability to conceal and reveal, not send and receive. More work may need to be done on this design to make this clear. 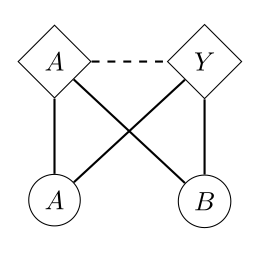 In addition to parties participating in multiple protocols, the protocols themselves may participate in other protocols. This leads to “MPC in the head” style protocols. 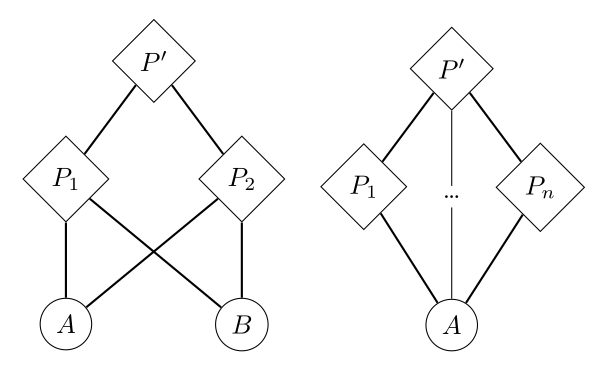 Finally, we can construct protocols for which each layer is a recursive application of a protocol through some form of party-polymorphism. 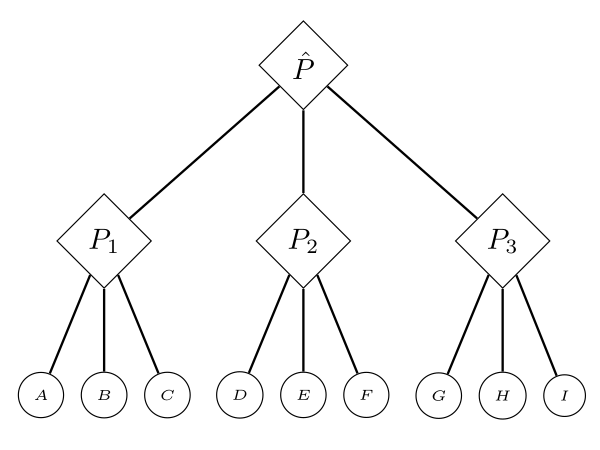 The details of this however, are still a work in progress.